There is nowhere else in the world where such a collection of wilderness and wildlife sits so adjacently to a major city. Only 4-miles (6.4 km) separate the center of the city from the wildlife in the reserve.

The national park encompasses an area of 45.26 square miles (117.2 sq km) and was the first national park established in Kenya. The park is smaller than most Kenyan and other Africa national parks. Although it is so small, it is quite diverse in habitats. The majority of the habitats are dominated by open plains, grasslands and scattered acacia trees.

Other parts of the park include a highland forest, rocky gorges, broken bush company, and riverine forest. The varied habitats bring a variety of mammals and bird species.

Almost everyone traveling to Africa sits in hope of seeing the predator species. Nairobi National Park does not disappoint with predators including lion, leopard, cheetah, and hyena. Other large mammal species include buffalo, black rhino, baboon, eland, gazelle, hartebeest, hippopotamus, impala, giraffe, wildebeest, and waterbuck. One of the missing species that most people hope to see is elephant.

The most populous species are found among the ungulates. Impala, wildebeest, Hartebeest, Thomson’s gazelle, Grant’s Gazelle, and Eland. It is fair to expect to see each of these species during a visit. The abundance of ungulates also makes the predator species happy knowing that their hunt is very easy.

There is an abundance of bird species with the vulture and ostrich being two of the larger or more intriguing species. The ostrich is commonly seen along the plains. Other large species include Crowned Crane, Kori Bustard, Ground Hornbill, Egyptian Goose, and the Black-necked Heron. There are several songbirds which serve as a complementary experience for the birdwatchers. 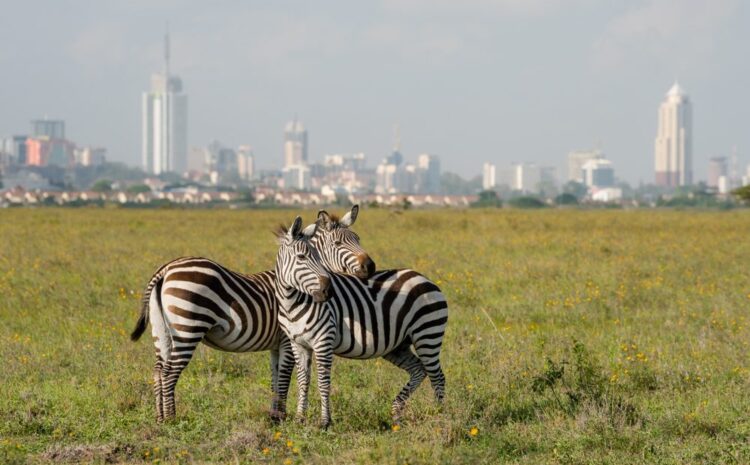 Climate: The park is generally dry except during the rainy season. Average day time temperature is 22oC/72oF.

When to go: The park is open year-round and always accessible. Visitors must enter the park in a vehicle.

Best time to visit: The best wildlife viewing is during the dry season (July – March). The rainy season (April – June) presents some difficulties on the wet roads.

Getting there:
By road – from Nairobi’s center travel via Langata Road. You can book a full day or half day excursion with Timken Tours.

Things to do and see

Wildebeest & Zebra Migration – This massive annual migration occurs from July to October when thousands of animals are on the move, searching for water and sustenance. The best times to view this incredible event is July and August.

Endangered Black Rhinos – The park is known as a valuable sanctuary for these endangered creatures. The breeding program has been so successful they supply black rhinos to the other national parks.

Sheldrick Elephant Orphanage  – This sanctuary rescues injured and orphaned baby elephants. Its experienced handlers nurture the babies back to physical and emotional health and eventually release them back into the wild.

Ivory Burning Site Monument – At this historic site, hundreds of tons of intercepted ivory have been periodically burned to show Kenya’s commitment to the eradication of the ivory trade and the protection of its elephant population.

The site is also visually inspiring with spectacular views of the plains below.

Walking trails – On these maintained trails, see the park and its smaller wildlife up close. There are also several picnic sites.

Visit Nairobi National Park With Us