It is hot, dry and somewhat out of the way, but Samburu National Reserve is the most popular park in northern Kenya.

Those discouraging features just might be the secret to its attraction. In a rugged area known for its desert-like climate, the animals of the park are sure to frequent its main source of water – the Ewaso Ng’iro River.

And as a visitor, you are certain to witness this abundant display of wildlife, regularly sustaining itself at the river. This reserve has its share of the big cats – lion, leopard and cheetah. And you’ll find many of the larger grazers here like impala, buffalo and hippo.

Elephants? Samburu boasts over 900 of these peaceful creatures… the herds gathering at the life sustaining river. Meanwhile beneath the river’s muddy brown waters, a significant population of Nile crocodile can be spotted, waiting for their prey.

Samburu is also known for some rather unique wildlife not usually seen elsewhere. A visit to the reserve will bring you in sight of such memorable species as Grevy’s Zebra, the reticulated giraffe and the Beisa onyx. And this is one of the few parks where you have a good chance of spotting African wild dogs.

For bird lovers the reserve presents a constant display of exciting avian life – over 450 species. On game drives over the savannah, through acacia forest and riverine vegetation there will be numerous opportunities to view kingfishers, marabous, vultures, guinea fowl, Somali ostrich, egret, falcon and eagle.

But despite the active wildlife here, the reserve gives off a sense of tranquility and a peaceful feeling. Some attribute this to the fact that Samburu is relatively remote and initially was inaccessible as other parks developed.

It is also a land of magical possibilities – this was one of two regions in which Joy Adamson raised and nurtured Elsa the lioness, whose story was told in the book and movie, “Born Free”. Samburu was also home to another renowned lioness, Kamunyak (“Blessed One”) who is famous for having adopted at least 6 oryx calves. She fought off predators to save her young orphans as seen in the film, “Heart of a Lioness”.

Named for the indigenous Samburu people, whose villages border the reserve, Samburu is out of the way yet presents visitors with so much to see and do. 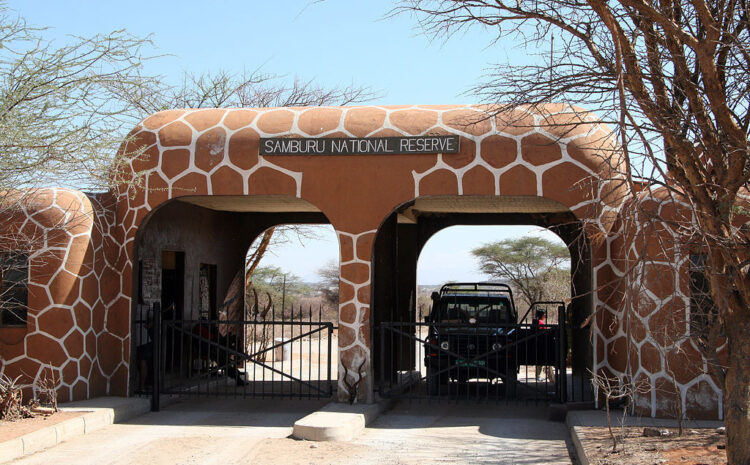 Location: From the main entrance of Archer’s Gate, the reserve is 345 km (214 mi) from Nairobi, about a 5 hours’ drive. Samburu is located in the Rift Valley Province. The Ewaso Ng’iro River borders the park to the south, separating it from the Buffalo Springs National Reserve.

Climate:  Arid, dry and desert-like are terms to describe the climate here. Average temperatures are around 30oC (85oF). The rainy season runs from March through May with a shorter wet season in November and December.

When to go: The park is open year-round and always accessible.

Best time to visit:  December through March and July through October are the driest months and the best for visiting, but Samburu is also enjoyable in the wetter seasons.

Getting there:
By road – you can book a tour with Timken Tours from Nairobi.

By air – There are daily flights from Nairobi to the Oryx Samburu airstrip.

Things to do and see
Game viewing & bird watching – The geography and climate of Samburu guarantees lots of wildlife viewing, especially during the dry season. It’s a bird lover’s paradise.

River rafting  – Take an easy river safari in an inflatable raft on the Ewaso Ng’iro.

Visit the Samburu People – The Samburu are a nomadic, herding people similar and related to the Maasai. They also dress in the same manner with blankets and beads. Visit a local Samburu village, meet the people, learn about their lifestyle and perhaps purchase some souvenirs of your experience

Buffalo Springs Reserve – Just south of Samburu Reserve on the opposite side of the Ewaso Ng’iro river lies Buffalo Springs, named for an oasis here. Similar wildlife can be found near an ancient lava terrace called the Champagne Ride.

Shaba National Reserve – To the east of Samburu and Buffalo Springs is Shaba Reserve. Greener than Samburu, the reserve is an area of dramatic forests, woodlands and volcanic formations, especially the Shaba Hill Volcano.

Visit Samburu With Us